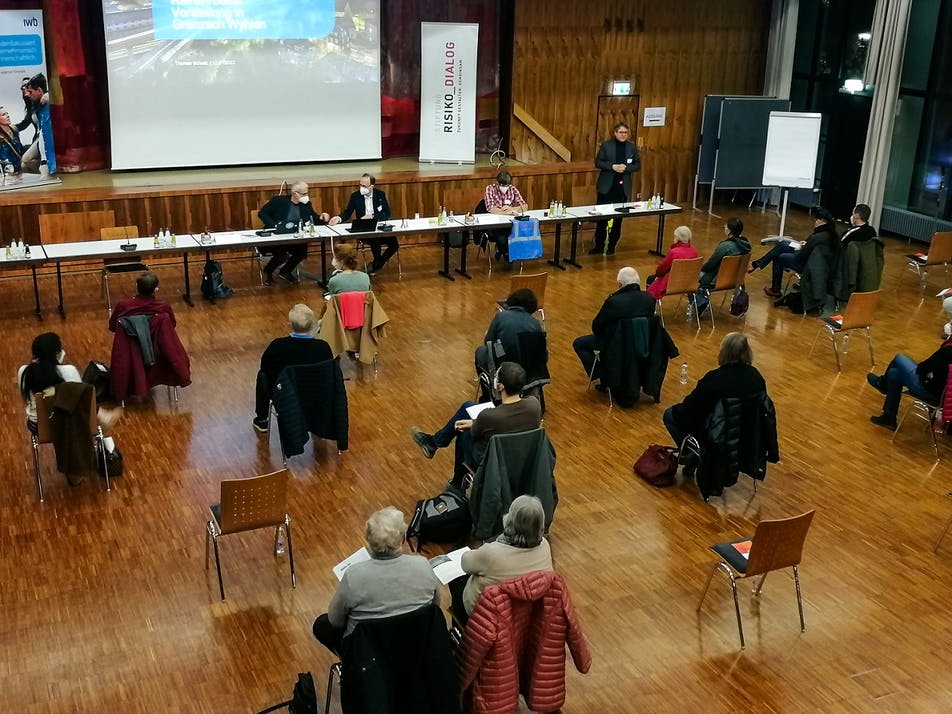 Geothermal energy is an emotional topic. This is precisely why participatory dialog with the population is so important. After all, geothermal projects can only be successfully implemented if they receive sufficient support from the affected population.

In Riehen, the Risk Dialogue Foundation supports Wärmeverbund Riehen AG (WVR AG) and IWB (Industrielle Werke Basel) in the “geo2riehen” project, in their dialog with the population and in their communication strategy. With the “geo2riehen” project, WVR AG wants to expand its geothermal plant in Riehen, which has been successful for 27 years. In addition, IWB would like to use the opportunity to get to know the underground more widely. From mid-January to the end of February, the 3D seismic campaign is now underway in Riehen, Bettingen, large parts of Basel, the neighboring Basel municipalities of Birsfelden, Münchenstein and Muttenz, and parts of the Grenzach-Wyhlen municipality. Light vibrations, generated by so-called vibrotrucks, are used to collect information about the subsurface. Simply put, the vibrations generated are reflected differently by different layers of rock in the subsurface. These reflections are measured at the surface with measuring instruments called geophones and, after complicated evaluation, provide a kind of picture of the subsurface.

Between January 12 and 27, the Risk Dialog Foundation is therefore organizing a series of dialog events. The lively discussion at the events so far shows support for such climate protection projects and a high level of fascination with technical details of measurement. In addition to the dialog events, the Risk Dialog Foundation published media releases and advertisements in various newspapers. In addition, the project was also reported on in all public transport in Basel by Basel Live, an information brochure on the project was produced, an explanatory film was published and information boards in various green spaces in Basel were used to draw attention to the 3D seismic campaign.

The 3D seismic campaign of Wärmeverbund Riehen AG and IWB in the Basel region is in full swing and should be completed by the end of the week. The Risk Dialogue Foundation is involved and again engaged in the dialogue with the population last Saturday. So we accompanied two visiting days, where the population could get to know the vibrotrucks, the geophones and the project managers personally. Both at the dialog events and on the visit days, we met numerous residents and answered their questions together with the project partners.

The exchange was exciting and showed a great interest in the topic. However, we also saw that there are uncertainties and that the exchange is important for this very reason. The questions were documented by us and a selection of the most frequently asked questions can be found in the FAQ of the project website. We try to update these questions and answers regularly. In this way, we ensure that people who were unable to attend the events also have access to all the information. The next step is to evaluate the data, which can take up to a year.