Solar Radiation Management – a last resort in the fight against climate change? 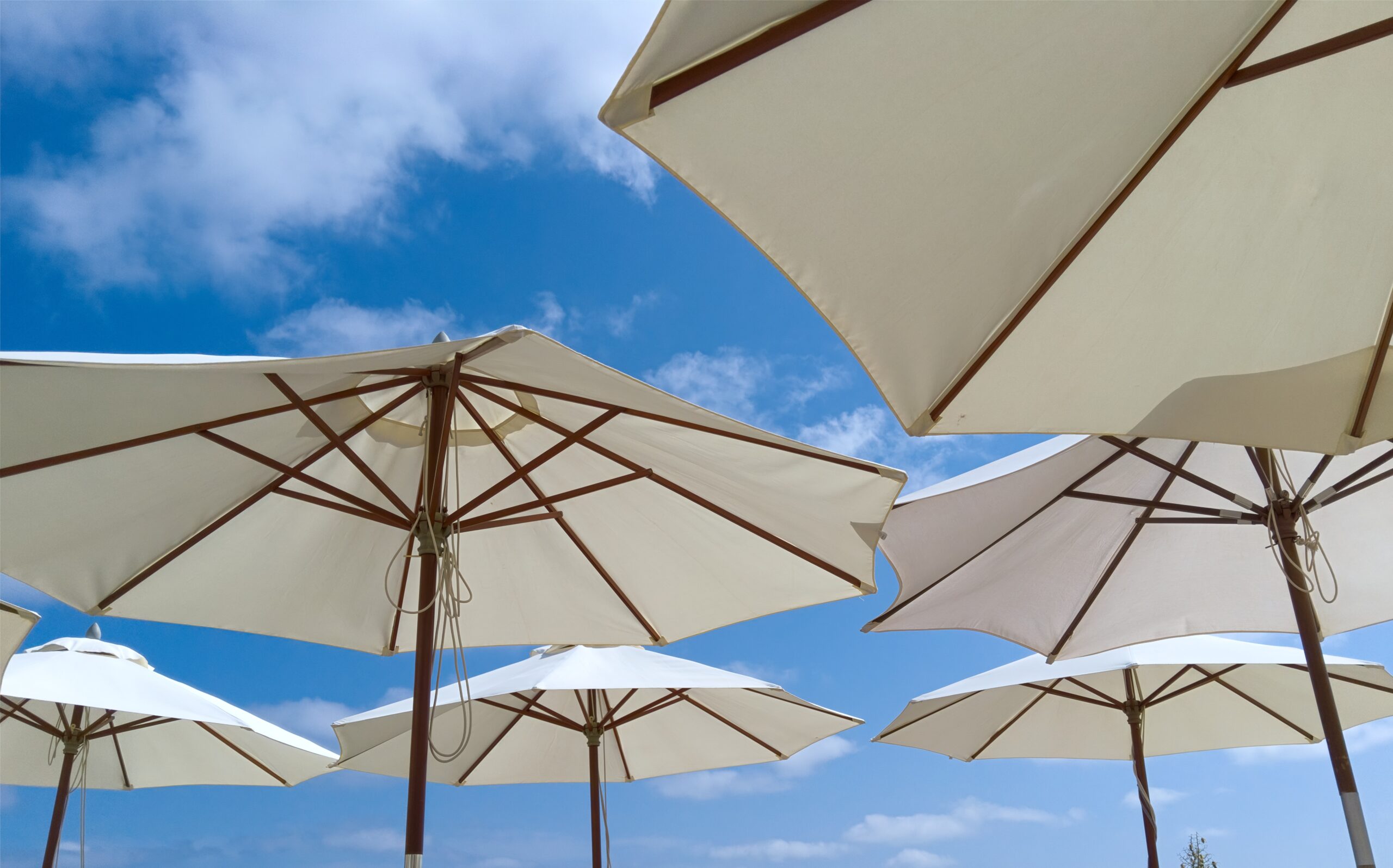 Despite plenty of evidence and a growing understanding of the complex interactions, humanity is struggling to stop the trend of warming caused by anthropogenic greenhouse gases. All climate models project significant global warming for the 21st century, as reported by the IPCC. Moreover, in some cases, it remains very difficult to assess the exact effect this will have on our environment and the people living in it. In our last blog post, we discussed tipping points that could very abruptly change life on the planet, but are not included in the climate models and associated scenarios. Which options remain, should climate action fail as increasing fatal effects of climate change start to realize?

Solar Radiation Management, SRM for short, is a proposal that has been circulating through research and debate for some time, but is usually treated more as science fiction than as a serious option. SRM refers to a type of geoengineering that reduces the amount of solar radiation reaching our planet – thereby affecting the planet’s energy balance. Before we discuss the arbitrary effects of these technologies, here are three possible types of SRM:

The albedo indicates how many solar rays are reflected by the earth’s surface. Reflective surfaces lead to solar rays being emitted as light rather than being converted into heat. If sufficiently large areas on the earth’s surface were covered with such reflective materials, global warming could be impacted significantly. For example, rooftops could be covered with reflective materials or large areas could be planted with reflective plants. However, the scales involved make this method very costly and rather impractical for significant global temperature changes.

In theory, mirrors or lenses could be used to intercept some of the sunlight while it is still in space, reducing the amount of warming on Earth. Even though first calculations seemingly prove the feasibility of such methods (1), this kind of SRM probably remains a topic for science fiction books for now.

Different possibilities for the reflection of solar radiation at different heights within the atmosphere are already being tested in small experiments – for example, in Australia with so-called cloud brightening (1, 2). Other research focuses on injecting sulfur dioxide molecules into the stratosphere (1), similar to large volcanic eruptions that have shown to affect the Earth’s climate. To do so, particles are induced into the atmosphere so that sunlight does not reach the Earth’s surface in the first place.

The list shows that SRM is already being researched and partly tested on a small scale. Consequently, we should now look into the pros and cons of research exploring such technologies and their implications.

Arguments against SRM research and deployment

Numerous representatives of the global research community implicitly or explicitly oppose SRM research. Several attempts for a moratorium have already been launched, but for the most part the topic could not attract any attention (1, 2). As a result, there is little funding for public research into SRM technologies and their effects (1, 2). There are great concerns that SRM technologies could be seen as an alternative to decarbonisation, mitigation and adaptation strategies. Opponents of SRM research further argue that the application of such technologies poses too many risks, such as unanticipated changes to our climate (e.g., affecting precipitation patterns, regional disparity in temperature change and side effects, etc.). In addition, SRM would not change greenhouse gas concentrations in the atmosphere. Under these conditions, a temporary deployment of SRM could lead to abrupt climate change upon cessation of the measures. Critics warn that research into such technologies paves the way for uncontrolled and uncoordinated implementations. Since the deployment of SRM technologies by one country or group would be almost impossible to control while affecting the entire world, a moratorium is the only reasonable solution in their eyes.

Arguments in favour of exploration and the question of governance

A small scientific community argues in favour of research into SRM and its consequences. They argue that stopping public research simply means that private and military actors, as well as autocratic states, gain sole control over such technologies (1, 2). Tipping points, both natural and societal, are an unpredictable reality (see our last blog post) and coupled with the stark geographic inequalities in climate change effects, there are concerns that parties could act single-handedly in exploring technologies like SRM. Knowledge needs to be publicly available, as supporters say, and we need to understand the possible impact of SRM in order to be able to have an international discussion based on facts – as well as to be prepared for any single-handed actions being taken.

Considering these arguments, the question about the governance of SRM arises (1, 2). The advocates argue that we should start thinking about how we want to deal with these technologies and the risks that they entail sooner rather than later. While initial research projects on this are in progress (1), we as a society should ask ourselves certain questions: How should research be regulated? What should communication to the public look like? Under what circumstances might the use of SRM be appropriate, and what would a risk assessment look like?

If an application of SRM is being considered, the purpose of that use must be clarified. The only purpose of SRM which experts currently consider reasonable is to mitigate the warming “peak” while we radically reduce emissions and further reduce CO2 levels in the atmosphere with negative emission technologies (NET) (1). The slow progress in decarbonisation is bringing the world ever closer to exceeding the 2° limit which the IPCC defines as the critical point for various irreversible damages. A temporary, controlled and coordinated use of SRM to complement adaptation and mitigation and to enable staying under the 2° warming limit would thus be a possible implementation, maybe even single-handed by individual countries or groups, implementation that should at least be part of the discussions around climate change. 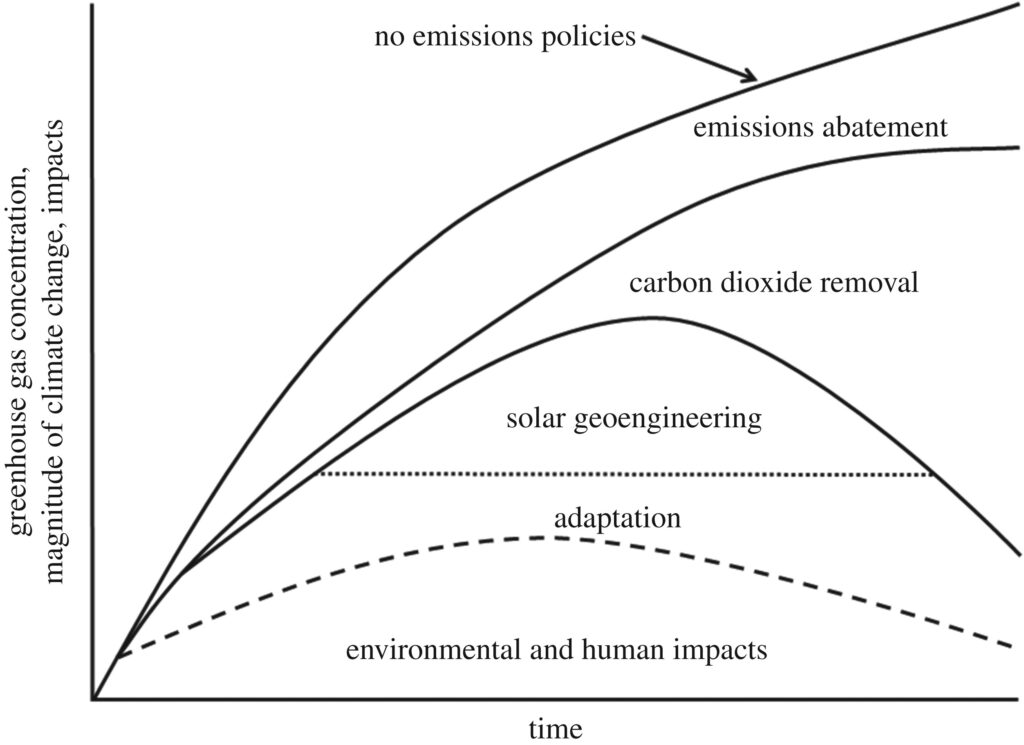 Source: Jesse Reynolds, 2019
Even with such a coordianted and temporary use of SRM, largely unexplored risks play a role (1, 2). On the one hand, we still know too little about the specific side effects of various SRM technologies. On the other hand, there is a risk that the end of an SRM application could have adverse consequences. If a long-term use of SRM suddenly ends, dangerously rapid temperature and climate changes could occur. But even a gradual phase-out of SRM with a decrease of atmospheric CO2 concentrations through other measures is still unexplored and could pose risks.

Therefore, when talking about SRM, we should always keep in mind that their effect is not exactly the same as the greenhouse effect we amplify by emitting greenhouse gases. We have no empirical data on what we would exactly have to face when using SRM. All our assumptions are purely based on models and projections. We cannot predict with certainty the actual effect on our climate (influence on precipitation, regionality, etc.). A 1.5° world through mitigation (reduced greenhouse gas concentration) is different from a 1.5° world through the use of SRM.

An impressive narrative about a state’s single-handed use of SRM in the face of a deadly heat wave – including the consequences of SRM application – can be found in the 2020 climate fiction monumental The Ministry of the Future by Kim Stanley Robinson. A review of the book can be found at klimafakten.de.